C. Penticoff: Hi Luna, thanks for joining me today. Can you tell us a little about yourself?

Luna: Ha, it’s a funny thing when a simple question like that can be . . . complicated. But I suppose living a double life can do that. I was born into the Falon family, an influential family in the Kingdom of Ebony. At least, that’s who they are to the mundane world. My family has been routed in the secret world of the Order for many generations. When a member of our family is born with the Knight bloodline, which grants them supernatural abilities, they become a Knight warrior for the family we have sworn ourselves to, the Iver’s. I was the one born with this burden. Now I live both as the pampered heiress, Aurora Falon, and as Luna, the proud Knight of Cole Iver.

C. Penticoff: That is very interesting! It sounds like you come from a very strong family, but tell me about a time you felt weak.

Luna: When I was young and my powers started to manifest. They were more than I could handle and went out of control. I accidentally hurt another kid I was playing with. After that incident, my father thought it would be best to keep me separated from my family while I was learning to control my powers. I felt so helpless and alone. It made me hate my powers.

C. Penticoff: I can see how that would be complicated. Although, it’s a great problem to have, considering everyone dreams of having magic powers. Now, on the flip side, why don’t you tell us about a time you felt strong?

Luna: When I fully took on the mantle of Cole’s Knight. I had worked so hard to control my powers and build up my strength to stop from hurting people around me but I still had a lot of complicated feelings about my situation. It wasn’t until I started to serve Cole that I started to be proud of what I was. The drive to make his dream a reality made me strife to be a strong and powerful Knight. It gave me the strength to leave behind the frightening, bitter child I used to be the Knight I am today.

C. Penticoff: It’s great you took something that, at one time, made you feel weak, and turned it into your greatest asset. Okay, why don’t you explain the hardest decision you have ever had to make?

Luna: When I first discovered my powers, they scared me more than anything. I was younger than most and completely unable to control the raw, destructive power flowing through me. I held onto the hope that something would change and I could go back to my normal childhood, without the fear of hurting those close to me. But I eventually had to realize that I had to leave that part of my life behind. It was over and I had to make the hard decision to completely dedicate myself to becoming to Heir to the Sword for my family.

C. Penticoff: That would be difficult. What do you think is the worst thing to have ever happened to you?

Luna: The night Cole was murdered. For a while before that horrible night, I had been seeing him as Aurora and we had built a relationship. He asked me to marry him earlier that day. It was like a dream come true. But he didn’t know who I really was, he didn’t know I was Luna. I had decided to tell him to truth that night, even if it meant he might hate me for lying to him. I didn’t want to live a lie. When I went to meet with him for dinner, that’s when I found . . . I was too late to save him. My biggest regret was that I never got the chance to tell him the truth.

C. Penticoff: I’m sorry your friend passed away. I know what its like to lose someone close to me. I know you feel you have unfinished business with him, but at least you can rest well knowing you tried to tell him the truth. Since we’re on the subject of Cole, why don’t you tell us about the love of your life?

Luna: I grew up being told that a good Knight is the obedient weapon of their Master but when I met Cole, he told me about how he wanted to change things for the better. He spoke of an old story about a Master and Knight that say each other as equals and did great things. He told me that more than a servant, he wanted a partner. On the surface, I said he was idealistic and that I thought it would be impossible to change the system they both lived under but deep down, I fell in love with him after that day. He was charming, sophisticated, and had bright eyes that always saw the best future he could build. His ideals shaped my mission to what it is today. It is my dearest hope that his dreams will be realized in the wake of his death.

C. Penticoff: I’m glad he was able to help you grow as a person before he passed. This is off topic, but, if you could only instill one core value into your children, what would that be?

Luna: Bravery. Bravery pushes you to work harder, forge into the unknown, and try things you’re afraid to do. If you have bravery, you’re not afraid of failure or misfortune. I think it’s the best attribute you could have in order to life a full life.

C. Penticoff: I agree. Being someone who has suffered with anxiety my entire life, I understand the struggle to be brave, and the extraordinary feeling you get when you finally face your fears. I want to end this interview on this: What is the one thing life has taught you?

Luna: Be open to change when it needs to be made.

C. Penticoff: Simple and straight to the point. I love it! Thanks so much for chatting with me today, and I hope to have you here again one day! Good luck with everything.

Luna: And thank you for having me. 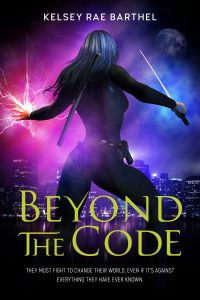 Get to know Luna and other great characters from Kelsey Rae Barthel‘s Beyond the Code.