This week, the indie author community was buzzing about  homophobic and racist comments made by a fellow author. The original post was a meme of two teenage boys laying in bed, with the tagline, “Parents: No girls at your sleepovers. Understood? Me: Very Much Understood. #GrowingUpGay.”

The post was meant to be funny, and made me chuckle myself as I pictured my best friend growing up saying or thinking these exact words. The post quickly turned to a homophobic and racist debate heard round the author community when author, Chrissy Korbal commented saying, “Fuck that. I would beat the fuck out of my sons.” Later, she mentioned she also taught her sons not to date outside of their race. 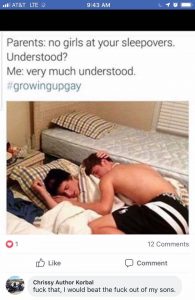 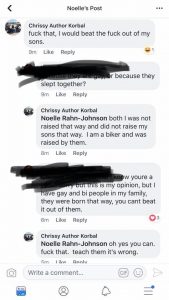 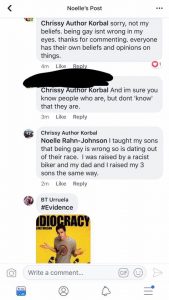 I believe it’s important for me to use my platform and privilege to stand up for those who are being oppressed, discriminated, or may not be privileged in the same way I am. This type of rhetoric should not be tolerated in the indie author community, or in the world, for that matter. As authors, our words and opinions are valued by our readers; so when we have someone spewing hatred, we need to make our voices larger!

Below are some comments left by other authors in the community, in support of people of color and the LQTQ+ community.

Author Mimi Milan questions the logic of Korbal’s comments: “I look at it As what is the most logical. Perhaps this is because I’m a former Guardian ad Litem, and I have to question the safety of a child who would be beaten for orientation. Is this a child in the care of a violent individual who has beaten them for other falsely perceived infractions? More importantly, if “gay” is something one chooses, then it would be something learned, and if it’s something learned, then what is the parent teaching them? There can only be one of two conclusions: The parent is a terrible teacher and mist blame herself for turning her child gay, or sexual orientation is not of one’s choosing. If the latter, why be punished for what is a natural occurrence?”

“You can no more beat the gay out of someone than you can beat the diabetes out of them. This level of dark ages mentality is both disturbing and disgusting in equal portions. Thank god it’s not 1600. Lady would be burning people alive at the stake.” – Jay Michael Wright II

Blogger, Alexis Long reveals more issues about Korbal, outside of her homophobia and racism: “Chrissy is a horblie author and she will burn bridges before they are even made. She ripped me off a pair of earrings I won and i let the author that runs the group and she was upset. Chrissy blocked me and was rude to me in messages. I still have all the messages. I don’t support chrissy at all. She needs her books taken down and not alound to write I’m sorry but im being honest. No author should disrecpet another author or a reader. She also attacks mc writers and has attacked so many authors that im posted about it because im a reader and I was gonna give her books a try but I’m not even gonna.”

Iris Sweetwater says, “She published with us once, and we ended her contract due to similar comments in the past, not only is it unintelligent and unprofessional when trying to sell a product to spew hateful opinions, but I feel a lot of her rhetoric is purposefully incendiary to try and rile people up so she can say more, I feel like she is certainly not helping the stereotype of the Republican supporters right now and that what she speaks of is the kind of supremacy we don’t have room for in this country anymore if it is to stay free and a republic regardless of religion it is nobodys business to judge and “beating the gay out” you can beat the behavior out of them sure but you are beating hate into them, the kind of hate that leads to the shootings we now see almost daily in this country.”

“The DSM does not identify gay as a mental illness and hasn’t for some time. Being gay isn’t strange, unusual, something that needs fixed or anything the person has control over. Rather than the backlash, I would have rather seen a ground of people get together to help her understand that she’s acting from a place of fear and misunderstanding rather than knowledge and strength.” – Melinda W. Burt

“The author community made me proud by standing together against such blatant homophobia and racism. Such behavior is just plain wrong and no matter who you are, people will call you out on it.”– Cassie James